We have been working a lot with bias and point of view when discussing historical events, so when it was time to teach about the Boston Tea Party, I kept with that same theme.
I started with the students by reading a nonfiction passage from Readworks about the Tea Party. As always, we began by noting the purpose of our reading (To find FACTUAL information about what happened during the Boston Tea Party) and then started underlining any evidence that fell under our purpose. The students answered the open-ended response questions using the RACE strategy we have been working with.
We next watched the Liberty's Kids - The Complete Series

pilot episode (this is my affiliate link) which happens to be about the night of the Boston Tea Party. I asked the kids to take notes on the facts that they saw in the episode and the opinions that were presented, including any bias that was presented (we had previously learned about that here.) On a side note, if you haven't watched the Liberty Kids before, you must. The student LOVE it and it is so full of historical information. They literally cheer when I put it on each time we watch. By I digress....
To continue with the learning, we read a graphic novel about the Boston Tea Party, The Boston Tea Party (Graphic History)

, (this is my affiliate link) again looking for evidence of fact and bias.
What the kids did notice was that these resources were heavily biased towards the American point of view. They seemed to present the British as "evil" and "greedy", out for the hard earned money of the poor colonists who just want to be left alone. They did mention the historical context, but presented the colonists as "Protestors" and not "Rebels". The colonists were "making a statement", not "vandalizing and destroying property." So we talked about it as a class, and made note of both sides of the story.
The students then took all of their notes, the facts and the bias, and wrote a paragraph from the point of view of a BRITISH person (or loyalist colonist) describing what happened that night. They wrote with much different language than the patriotic, pro-American views we had been reading about.

The final piece of this was a fun project I saw on my friend Kristine's blog, Young Teacher Love. The students created the outline of a big eye. In the pupil portion, they drew what happened during the Boston Tea Party through the eyes of the British. The students really enjoyed getting to be creative and a bit biased at the same time. 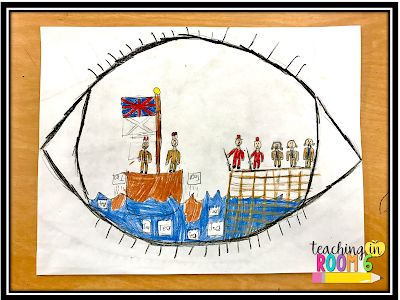 So far, using the ideas that there is always three sides to every story -- his side, her side, and the truth -- has been making a big impact on how my students are learning and internalizing the historical events we have been discussing. And I am liking it!

Will be used in accordance with our Terms of Service
More posts from Teaching in Room 6
Add a blog to Bloglovin’
Enter the full blog address (e.g. https://www.fashionsquad.com)
Contact support
We're working on your request. This will take just a minute...
Enter a valid email to continue