Today's post: a form of horizontal surface decoration added with a crochet hook, a trick I call Fake Latvian Braid (FLB). Here is a photo of an easy little 3-row high teaser, but this barely scratches the surface: FLB can be used for many far more intricate braid patterns as shown lower in this post.


Background: Real Latvian Braid Real Latvian Braid is a distinctive decorative element instantly associated with the famous and intricate Latvian mittens. (Want to see 4500 pairs of Latvian mittens in an on-line gallery? For a 2006 NATO conference held in Latvia, 250 knitters made all these as gifts for the delegates. Funny to think a military conference would inspire such a resource.)

Real Latvian Braid looks like a bar of knitting worked at 90 degrees to the rest of the fabric--a sort of horizontal trim. It can be worked in a single color, or in two colors, as on this mitten from the gallery, with its two lines of handsome black-and-yellow braid.

Real Latvian braid is a form of surface decoration created by a yarn stranded onto the fabric surface as the yarn travels from one stitch to another. It isn't difficult to do, here's a good video. Yet, whenever I see it, it reminds me of a similar-looking stranding you get from the slip stitch. So, with a bow to tradition, here's a TECHknitting version of Fake Latvian Braid (FLB) based on slip stitch.

Just like real Latvian Braid, FLB can be located anywhere in the fabric--so close to the cast-on that it look like it is the cast on, or in the middle of the fabric. Also like the real thing, rows of FLB can point right (tip of each stitch at the right) or point left. Unlike real Latvian Braid, which is knitted-in, FLB is a form of surface decoration done after the knitting is complete, making it easy to install, easy to remove, easy to re-locate.

Fake Latvian Braid (FLB) How-to FLB nothing more than a crocheted slip stitch worked through a knitted fabric so that the two arms of the chain appear on "public" face of the garment.

Fake Latvian Braid (front)--chained appearance
The back part of the slip stitch anchors the chain, creating a dotted or "stitched" appearance on the fabric back 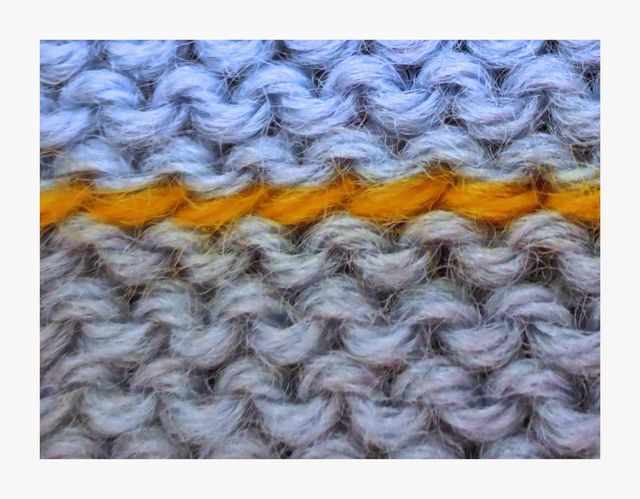 Fake Latvian Braid (back)--dotted or "stitched" appearance
The one-color version of this is the simplest. It is done just as you would use a slip stitch to stabilize a knitted fabric with the exception that it is always worked from the front face of the fabric, the point of the exercise being the chain decoration.

In the step-by-steps below,
Step 1: Holding the cc yarn at the knitted fabric back, insert the crochet hook into the very middle of your target stitch--right between its two arms. Catch the cc yarn on the hook and draw the loop to the fabric surface, as shown below. This creates a loop.

FLB step 1
Step 2: keeping the loop around the barrel of the hook, insert the hook between the arms of the next stitch in the same row. Again catch the cc yarn, again draw a loop to the fabric surface, as shown below. This creates a new loop.

FLB step 3
Step 4: repeat steps 2 and 3--as you draw up a new loop, the loop further down the barrel becomes the old loop.

First chain made. Repeat steps 2 and 3 for additional chains
* * * ADDENDUM, November 2015. Lots of knitters have written to ask---

In answer, there is a new TECHknitting post called "The mechanics of slip stitching," which includes a VIDEO. Check it out...

* * *
FLB can be made rather flat, by using the same yarn for the FLB as for the garment fabric (thinner top braid). Or, you could make the FLB an almost structural element by using a heavier yarn than the one used for the background fabric, or even a doubled yarn (thicker bottom braid).

Single-yarn FLB above, doubled yarn FLB below: note these braids point left
As you see, the narrow end of the stitches the above photo point left. There's no mystery to this: the narrow end of the stitch always points at the insertion point. To get a row of right-pointing FLB, work from R to L, as illustrated in the step by step instructions. Yet, to change the direction in which the FLB stitches point, there is no reason to awkwardly change the direction of your slip-stitching. Instead, rotate the fabric 180 degrees, which turns the fabric upside-down, then work the FLB in whatever direction is easiest for your handedness. When you turn the fabric right-side up, the braid will point the other way. (See pro tip 5 for more about how to make fabric rotation easier.)

FLB can also be worked along the top of ribbing. The great thing is, when worked along the ribbing/stockinette transition line, FLB combats flip! In truth, I rarely PLAN to work FLB along a ribbing, mostly I trot this trick out to combat band-flip when it shows up--a true "afterthought" use.

2) This anti-flip trick is also adaptable for stockinette roll, see "uses," below. It also has a first cousin you can use to control flipping vertical garter stitch bands.)

Two color FLB So far, all the FLB samples shown have been worked in a single color. The two-color version is not a lot more complicated. It is achieved by holding two different-color yarns on the fabric back, then alternately drawing a loop of one color through a loop of the other color. Below is a single line of alternate-color FLB at the top of a ribbing.

Two color Fake Latvian Braid at ribbing transition zone
To avoid having the running yarns twist and tangle around one another (as they always do with real Latvian Braid), hold each yarn in a consistent location (one above and one below) and draw the yarns alternately and directly.

Working a three- or more color FLB is certainly possible, also, but with each color added, the amount of bulk at the braid-line increases substantially.

Stacked FLB: Multiple-row braid trims Here's the ultimate expression of this trick, the big payoff: intricate braid patterns made by stacking multiple rows of FLB worked in opposite directions or the same direction, in the same colors or different. All sorts of woven-looking "trim" effects are possible from stacking, below are schematics and photos. The dark box in each schematic shows the minimum stitch and row repeat.

THREE ROW ALTERNATING-COLOR-ROW TRIM (2-way)
First up is one of the simplest--the post opened with this trim, and here is is again, this time with its schematic. This is a simple 3-row stacked design composed of alternating rows of solid color (so it's called "alternating-color-row" trim) with the middle FLB made in the opposite direction from the top and bottom ones (it's called a "2-way trim" because the rows of FLB go in two different directions). 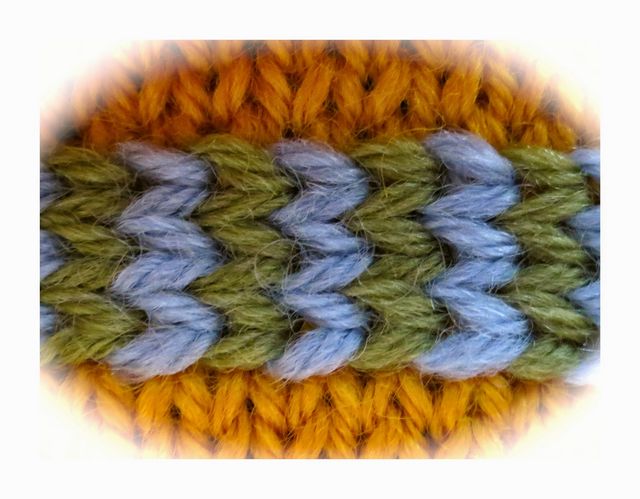 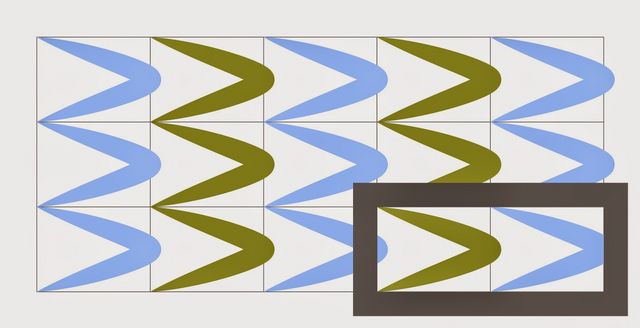 Three row 1/1 alternating column trim (1-way)--schematic
FIVE ROW 1/1 CHECKERBOARD TRIM (1-way)
This trim is like the one just above with two exceptions: There are 5 rows of 1/1 FLB instead of 3, and the rows stacked so the colors alternate in the columns to create a checkerboard. 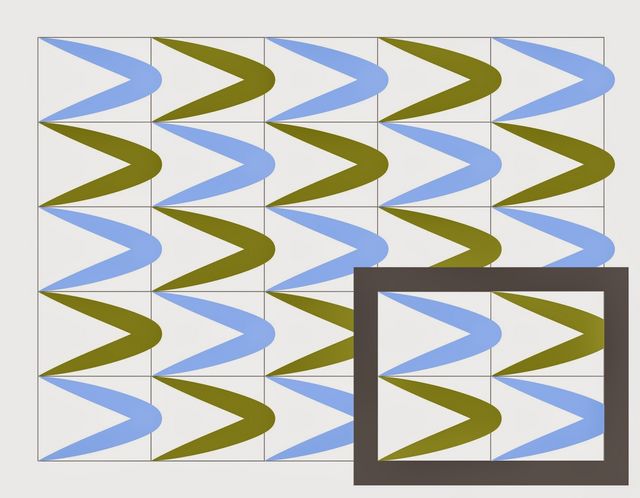 FIVE ROW 1/1 ZIG-ZAG TRIM (2-way)
This trim is the two-way version of 1/1 checkerboard trim: in this trim, the second and fourth rows go in a different direction than the first, third and fifth. In other words, the same distribution of stitches either makes a checkerboard or a zig zag, depending whether the design is 1- or 2-way. You'll notice a little red-colorized tail of yarn at the bottom of the trim, the explanation is in pro-tip 3, below.

Six row 2/2 zig-zag trim (2-way)--schematic
These examples are only a tiny sample. For one thing, these are all simple two-color geometric repeats. Changing colors between rows or adapting irregular patterns opens more possibilities. Further, as Anon has pointed out in the comments, it is also possible to switch direction with FLB mid row--a thing theoretically possible with real Latvian braid, but much easier with FLB.

Sources of inspiration for future experimentation include handwoven inkle trims, friendship bracelet designs, Norwegian-style trims. Exprimentation is low-cost. If you try a pattern and don't like it, FLB--stacked or single row--is easy to pull out.

Pro tips part 2 3) To keep the columns of stacked FLB trim from spreading, or to prevent show-through of the background color, you can use a blunt-tipped yarn needle to draw a matching-color sock yarn back and forth under both arm of the chains. To avoid puckering, watch your tension as you draw the yarn under the chains. 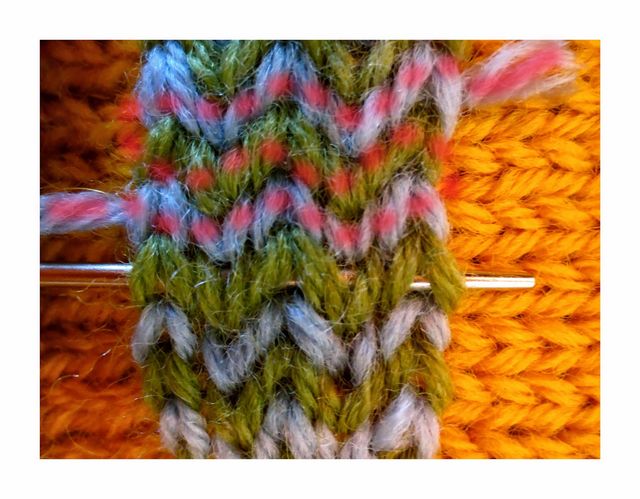 Stabilizing FLB by drawing a yarn under the chains. This particular FLB trim is the 1/1 zig zag, so the yarn is drawn under offset yarns of the same color. For non-zig zag trims, the yarn is drawn under straight (not offset) columns.
When you do this on a zig-zag trim, as shown above, the different colors are offset in different columns. Nevertheless, the trick here is to draw the yarn through these offset columns of the same color, because that sets the zig-zag. As an example, the needle is inserted through all the green stitches, despite the fact that the green stitches are offset one column. The resulting track of the yarn is shown by the zig-zag dotted red line. Does it work? See for yourself: in the beauty-shot of this 1/1 zig zag above, the zig zag to the left of the colored red tail has been "set" in this way, the fabric to the right has not.

4) It is also possible to stabilize stacked FLB from the back, as shown below. 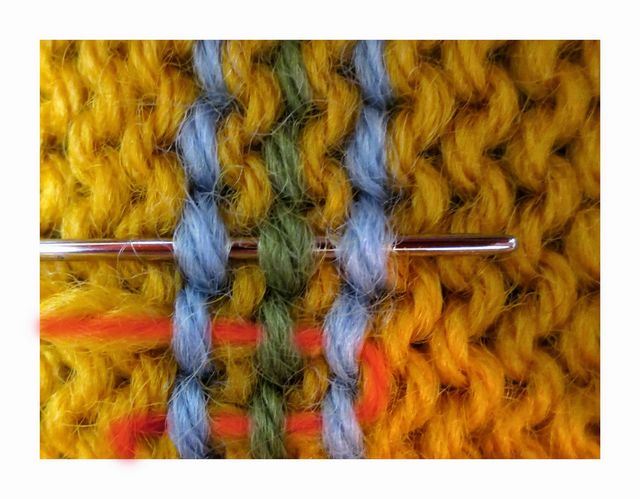 Stabilizing FLB from the back--this is the back of alternating-color-row FLB
5) Two-way FLB is easiest to work by rotating the fabric between rows going in opposite directions. Yet, when working on rotated fabric, it's easy to mistake where to insert the hook, since stockinette fabric upside-down looks to be half-a-stitch off the way it looks right side-up.

See for yourself: The right side-up fabric is to the L in each of the below photo-series has a little green dot in the lower R corner. When the fabric is rotated 180 degrees (upside-down) the green dot rotates to the upper L corner. On both orientations, stockinette fabric appears as a "V," although on the upside down fabric (green dot at upper L) the V appears a half-column over. If you were to work an FLB on rotated fabric based on the appearance of the V, the FLB would also be a half-stitch off an FLB worked on un-rotated fabric. In other words, the stitches of adjacent FLB rows would not align in the columns.

Right side up vs. upside down (180 degree rotated) fabric: both look to be composed of V's although the V on the rotated fabric (dotted line) is half-a-column over
You can solve this problem without having to mentally turn each V upside down if you use a quilter's magic marker (color fades in an hour) to mark the center of the stitches. When you turn a marked fabric upside down, it's easy to see where to insert the needles: the V's upside down (^'s) are easy to pick out via the dots.

When marked, it's much easier to see the correct insertion point: the now- upside-down V's (^'s)
Uses * * *
Good knitting--TK

View original
Save
36 loves 11 saves
Subscribe to TECHknitting™
Get updates delivered right to your inbox!

Will be used in accordance with our Terms of Service
More posts from TECHknitting™
Add a blog to Bloglovin’
Enter the full blog address (e.g. https://www.fashionsquad.com)
Contact support
We're working on your request. This will take just a minute...
Enter a valid email to continue