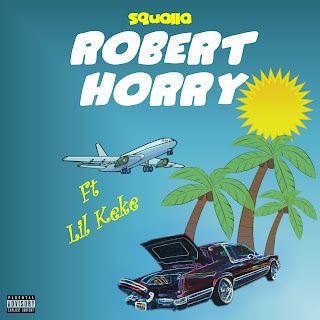 LOS ANGELES, CALIFORNIA --- Celebrating Halloween and closing out the month, emerging new artist Squalla continues his reign of consistency by dropping another slapping new single "Robert Horry" out now on all platforms. The bouncy new track features Lil Keke and the thumping instrumental comes courtesy of Dez Dynamic. Fans can expect the official video to come soon as well, which Squalla says will be shot in Houston (his hometown). The buzzing new artist moved from Houston to California recently to help take his career to the next level, while also mixing his Houston sound with the California energy making for a great combination. What Squalla calls "a new anthem for the city of Houston," this new banger is a must-listen for the folks down South and everyone in between.

While 2020's been a whirlwind of a year, Squalla hasn't slowed down one bit. Coming off recent releases
"Look At Me" and "Floating", two hard-hitting singles, the passionate emcee is prepping a new album to drop some time next year. Known for catchy lyrics, unique-sounding instrumentals and a plethora of passion, Squalla's on his way to becoming a household name. With the aforementioned new album on the horizon, there's a lot to look forward to from Squalla and the rest of the JV Inc. team.

View original
Save
Subscribe to T.W.U.M.
Get updates delivered right to your inbox!

Will be used in accordance with our Terms of Service
More posts from T.W.U.M.
Add a blog to Bloglovin’
Enter the full blog address (e.g. https://www.fashionsquad.com)
Contact support
We're working on your request. This will take just a minute...
Enter a valid email to continue