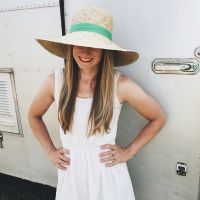 My little sister is months away from welcoming the newest addition to her family. I love seeing her as a mom. Watching from a close distance as she shares her passions and talents with her girls is quite beautiful. My mom said I was a proud big sister the day Lesley was born. I’m still so proud of her.

I was a little giddy when they decided they wanted to find out the gender this time. When I was having babies, Gender Reveal Parties weren’t a thing. I so hoped my sister would be up for doing something fun to share their exciting news with friends and family. Thankfully, they were up for letting me help them come up with something.

I’ve never been to a gender reveal party, so I did some Pinterest searches for ideas. I found one for a hanging box, similar to a pinata…perfect.

They have two adorable girls.

Now they are having a……

I couldn’t find a tutorial for how to make the box, so I winged it a couple hours before the party (it was the day she found out). I thought I would go ahead and share how I made it…in case someone else needs some ideas for to do something similar too.

I knew I wanted to make a ‘trap door’ on the side (which would become the bottom), so I taped up the bottom of the box. Before taping the top, I punched a hole in each corner. Next, I pulled a string through the holes and combined them in a knot on top (to hang from a rope on a tree). After the string was done, I taped the top of the box.

Next, I cut my trap door. I cut three sides and scored the fourth side. If I were doing this again, I would cut the door about two inches from the side of the box. I cut it a little too close to the edges. It made taping the box shut harder.

I filled the box with balloons and cut confetti.

I punched two holes in the ‘trap door’ and thread ribbon through it. Later, I learned that I should have used a much strong rope or doubled the ribbon. After filling the box, I taped the ‘trap door’ shut with washi tape. I was going to use masking tape, but somewhere in the process I misplaced it. Washi tape worked great because it held the box shot, but isn’t super strong. 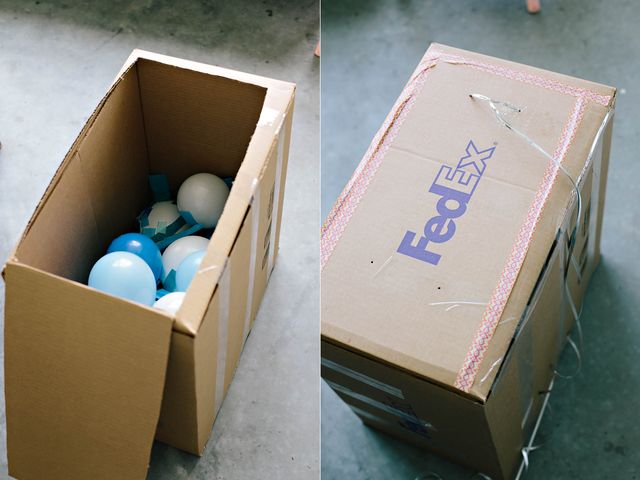 Finally, I wrapped the box in paper. I extended the paper some on the bottom edge so when it was hanging everyone wouldn’t be able to see the box label. I added ribbon to help cover the box some and finished it off by painting a little on the paper. There are so many ways you could make this extra cute…but if you only have a couple hours to gather your supplies and make it, this works pretty well.

Everyone gathered around anxiously waiting to see what would fall from the box. The girls tugged on the ribbon and POP. It broke. DIY fail. Use a strong rope or at least not curling ribbon!

Thankfully, Eric is tall and could just reach up and open the trap door….it’s a BOY!!!

My youngest niece has been adamant that the baby was a girl. She took the surprise that she’ll have a baby brother pretty well. Cutie. 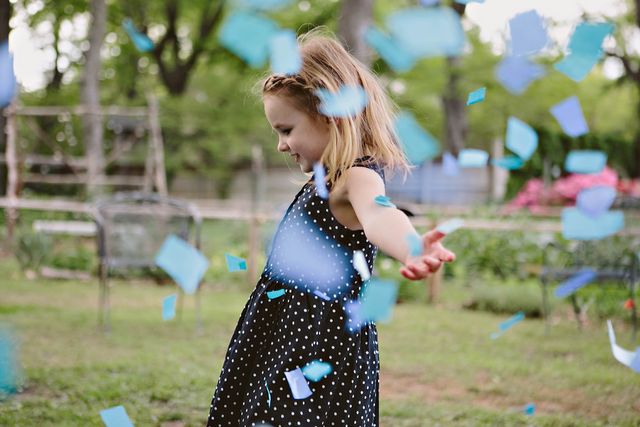 We’re all excited for a new little one around here. On my side of the family it was my three boys for so long. Then all the sudden they were outnumbered with four girls. Now my parents will have 4 grandsons and 4 granddaughters. My dad has already called for a tie breaker….hear that Lesley?
View original
Save
5 loves 4 saves
Subscribe to Under the Sycamore
Get updates delivered right to your inbox!

Will be used in accordance with our Terms of Service
More posts from Under the Sycamore
Add a blog to Bloglovin’
Enter the full blog address (e.g. https://www.fashionsquad.com)
Contact support
We're working on your request. This will take just a minute...
Enter a valid email to continue